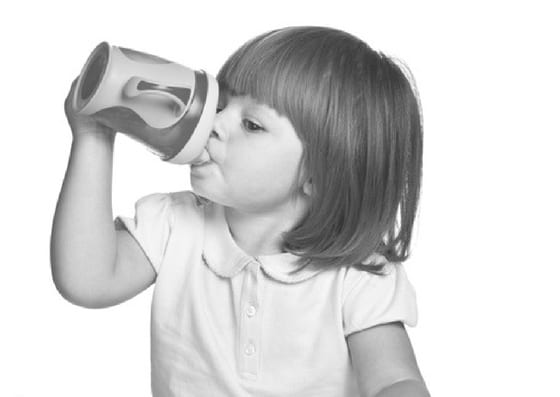 Did you know that cavities in preschool-aged children are on the rise? Many dentists think sippy cups are to blame.

Sippy cups and bottles can make a parent’s life easier, but they aren’t the best for a child’s teeth. If your child drinks a liquid containing sugars from a sippy cup throughout the day, the sugars can cling to their teeth and cause tooth decay.

Do Sippy Cups Cause Cavities?

A Centers for Disease Control and Prevention (CDC) report comparing the dental health of Americans from 1988 to 1994 and 1999 to 2002 determined that while cavities decreased among older children, cavities in two- to five-year-olds increased 15.2 percent. Research suggests that increased sippy cup use in the preschool-aged children is the primary factor for this upsurge.

There are several problems with sippy cups: their content, the prolonged nature of their use, and their utilization during bad times of the day.

The American Academy of Pediatric Dentistry (AAPD) believes that even though sippy cups were designed to be utilized for short transitional periods while children adjust from breast or bottle feeding to regular drinking cups, many parents use them for too long for the sake of convenience.

The problem with sippy cups is that, unlike a regular cup, the hard or soft drinking spout puts liquids directly in contact with a child’s teeth. If that liquid contains sugars – even natural ones like those within milk or juice – those sugars hit the tooth enamel head on and can begin to erode it.

Carbohydrates in general, including sugary drinks, can decrease saliva production, robbing teeth of their first line of defense. Saliva contains minerals that are important for maintaining teeth, so healthy saliva flow is crucial to oral health.

Because sippy cups are so convenient, parents tend to let children use them throughout the day, and in many cases, they become a pacifier of sorts.

How to Minimize Damage from Sippy Cups

Many dentists recommend only putting water in a sippy cup to avoid enamel erosion. If parents need to put milk or juice in a sippy cup during a period of transition, remember that usage during certain times of the day causes more damage. If your child is drinking a drink with sugar, be sure to time sippy cup use in conjunction with a meal. Then clean your child’s teeth after eating and drinking.

Using a sippy cup with anything but water right before naptime or bedtime is not a good idea, as sugars consumed during this time usually have prolonged contact with the teeth without being brushed or rinsed away. If your child has a bedtime sippy cup habit, try to break it with water as soon as possible.

The AAPD also recommends transitioning your child to a regular cup as soon as the child is ready. This may mean a few more spills, but it will have a positive effect on your child’s overall oral health in the long-run.

Do Bottles Cause Tooth Decay?

Unlike sippy cups, baby bottles are a necessity for many parents during their child’s first year. However, tooth decay resulting from bottles is a real issue, especially when the bottle contains liquids other than breast milk. The nipple of the bottle causes sugars from milk, juice, formula or other liquids to collect around the child’s teeth and gums – which can promote the build-up of plaque and lead to decay.

As with sippy cup use, one of the most important points to remember is to avoid putting your child to bed with a bottle containing anything other than water. If he or she does drink from a bottle, don’t forget to clean his or her teeth with a soft cloth or brush after drinking.

Note: Dentists recommend weaning your child from their bottle by their first birthday and transitioning to a regular drinking cup as quickly as possible.

One of the greatest ways to get factual information about sippy cups and dental care for your young child is to schedule their first dental visit at the right time. According to the AAPD, many parents wait too long to bring children in for their first visit and miss out on important information and oral care tips. Set up your child’s first dental visit when their first tooth erupts or before their first birthday – whichever comes first. Getting in to see the dentist early will help you and your child establish a good oral hygiene routine (including sippy cup use) and allow the dentist to get a preliminary look at your child’s mouth and note any potential problems. Making that first dental appointment early helps parents avoid common pitfalls and can establish a lifetime of strong dental habits for your child.